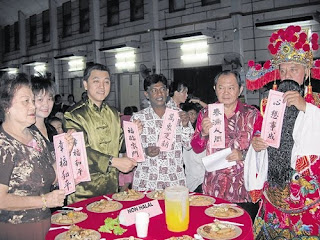 Posted by 郭庭恺 Koay Teng Hai at 8:53 pm No comments:

Boys and girls come out to play 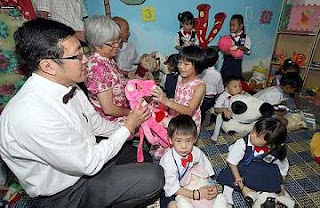 Nurturing children's creativity: (From left) Dr Sim and Chong playing with the children during the launching of the toy library.

FIVE rural public libraries in Penang are now more colourful and appealing, especially to young children, following the opening of toy libraries within their premises.

The toy libraries also have colourful wall murals of cartoon characters that brighten up the place.

“We decided to extend our project to the rural libraries as some of the children who come here do not have toys in their homes.

“It is also better to have the toys placed in a community area so that the children can learn to play together instead of by themselves,” he said.

The other rural libraries with the toy libraries are located in Macallum Street (George Town) and Pantai Acheh (Balik Pulau) on the island, and Lahar Minyak (Kepala Batas) and Sungai Acheh (Nibong Tebal) on the mainland.

Dr Sim said that since the project’s inception, about a tonne of used toys had been collected from the public every month.

He said these toys were cleaned and rehabilitated before being put in the libraries.

“Once the children are attracted to the toys, we believe they can also be interested in reading the books as well,” she said.

“Many children these days are unduly pressured to excel in their studies.

“But we need to look at our children’s potential in other areas as well to develop well-balanced characters in them,” she said. 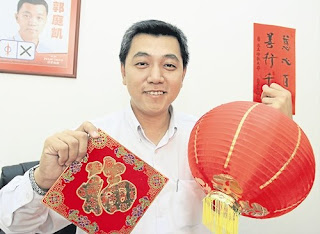